Lending her greatness to this gem from Major Lazer, the follow-up to the grower "Lean On":

Also features Tarrus Riley. The video is a bit of a chestnut, but still nicely done 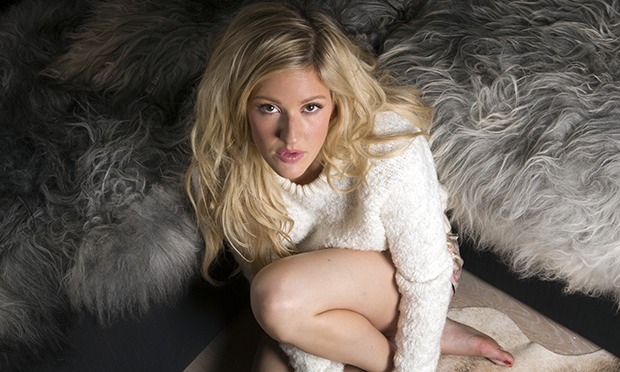 Her 3rd album 'Delirium' is coming out in November, and new single is "On My Mind"

Ellie Goulding: Live @ V Festival 2015
A short selection favouring her 2nd album material. It seems to have made her a much bigger star, which is a shame because I thought the 1st album was better.

And here's the lead track from her 3rd album, suggesting that she's sticking with this "sex kitten" shtick:

The Delirium LP is out in November.

The single entered the charts at #7, which is clever because I didn't realise it was out yet

The album 'Delirium' is released today, and in competition with Little Mix, Seal, Sara Bareilles and others also out today.

Well, her album entered at #3, behind Little Mix at #2, and the elsewhere-mentioned Elvis Presley still #1.

Bound to be a new single out soon, though.

misery guts wrote:Bound to be a new single out soon, though.

She's split up with McFly boyfriend Dougie Poynter, and is going on hiatus for a bit instead

She said: ‘I am not quitting music, I’ve come too far for that! Just having a break. It’s been seven years since I had time off…Love you all’.

So she’ll be back, just not right away.

In the mean time Ellie is going to chillax and ‘live a bit’.

Ellie Goulding's #Hangout
Unlike the one from 2014, this was an interview/informal chat with Will Best, interspersed with several of her videos (including Powerful). She spoke of her dislike of flying, what Las Vegas was like, being a bit fed up with her older hits, Elton John and Calvin Harris, why she would like to be invisible, her influences like hip-hop & house. She came across as likeable, as I would have expected.

Ellie Goulding @ Glastonbury 2016
Still not headlining yet, this was just a half hour set from Sunday evening. It seems a shame to me that her 1st album seems to have totally gone from this already. Mind you, that's career progress, of a sort.

Ellie's back with a new single from the forthcoming Bridget Jones movie:

Still Falling For You

Already in the top 30, seems to be cutting a good niche in movie songs

MTV World Stage: Ellie Goulding
From the Piazza del Duomo, Milan, in Oct 2015, a short set notable for including Lights, but ending with Love Me Like You Do. I might have to get round to hearing this 3rd album, I think.

Chainsuckers can't score a #1 without the BS streaming and a feature. 12 weeks #1 for a song with a beat for a chorus. Geez, I'm gonna start a band called 'The BeerDriinkers (Yes, must have two i's). We won't need any talent, just a repeated beat. As long as we're arrogant and get beer companies to sponsor us, we'll be #1. See how easy that is

Ellie Goulding - Live @ V Festival 2017
A steady little set with a couple of less familiar choices. I suppose it won't be long before there's talk of a 4th album.

She's returned with some new material, working with Diplo and Swae Lee, and a video shot in Budapest:

Whether this is a harbinger of a 4th album remains to be seen, though. Growing on me...

The Jonathan Ross Show - Ellie Goulding (4/5/19)
She was a guest on the last show in his series, talking getting engaged and planning to marry this year. She liked Celine Dion, but not life drawing. She was booked for the wedding of William & Kate on the strength of her 1st album. She has a new single, Sixteen, which she performed at the end of the show (and has done a little better than its preceding Flux).

Sixteen seems to have done pretty well so far. More like Close To Me than Flux.

Radio 1 Big Weekend - Best Bits
A useful hour compilation to encompass the many acts who otherwise weren't featured on telly, including Stormzy, Sigrid, Catfish and the Bottlemen, Foals and of course Ellie, who did Sixteen at least.

She's back with the track Hate Me, which also features Juice WRLD and has entered the top 40 this week.

She got married on Saturday at York Minster.

misery guts wrote:
Whether this is a harbinger of a 4th album remains to be seen, though. Growing on me...

However, she has recently covered an old Joni Mitchell track, River, which despite being an "Amazon exclusive" has this week leapt up to give her only her 3rd UK #1 single (after Burn and Love Me Like You Do)

She's been giving her views on the current mental health debate:

She felt overwhelmed by her early years of fame, though in a happier place now, and feels social media is a necessary evil to keep a profile.

More happily, she's worked with Blackbear on a new single:

misery guts wrote:I suppose it won't be long before there's talk of a 4th album.

Later w/Jools Holland - Ellie Goulding
The 4th album will be called Brightest Blue, out on July 17th, just after my birthday as it happens. She's trying to learn piano in lockdown, as she usually uses guitar. She picked Lauryn Hill, Bon Iver, Yasmin Levy, Antony and the Johnsons and Laura Marling from the Later archive. She grew up in Herefordshire, and was a shy performer. She wrote the new album in New York, and was influenced about nature. She feels her lyrics are more crafted now. There was also bits from Charli XCX, Tim Burgess and Haim about new material releases. Ellie talked about doing the rather lo-fi Power video, and finished off with CeeLo Green.